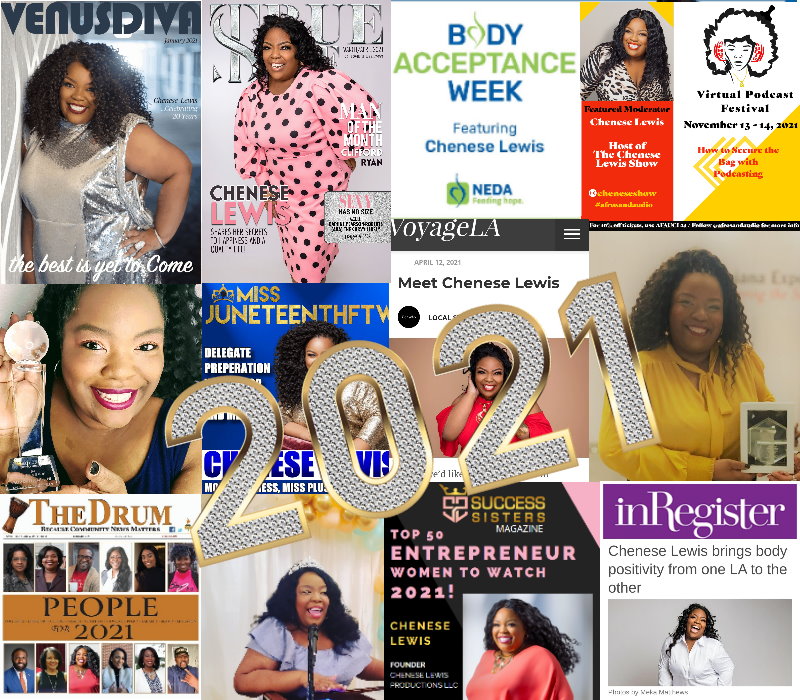 2021 got off to a great start for Chenese, as she was announced one of The Drum Newspaper’s People To Watch For 2021, followed by Success Sisters Magazine’s Top 50 Entrepreneur Women to Watch In 2021. These prestigious accolades were a precursor of the year ahead and success was inevitable.

With the Covid-19 pandemic in its second year, many events remained virtual. Chenese moderated a panel discussion for Afros and Audio Virtual Podcast Festival entitled “How to Secure the Bag with Podcasting”. She served as a judge for the Miss Sparkle Nation Virtual Pageant and taught a delegate preparation workshop for Miss Juneteenth FTW Pageant, which is a part of the annual Juneteenth Celebration in Fort Worth, TX. The National Coalition of 100 Black Women, Inc. Baton Rouge Metropolitan Chapter utilized her expertise for BrandHER, which taught strategies about brand marketing, and she served as Mistress of Ceremonies for their 2021 Virtual Installation Ceremony. As events returned to in-person, she was a speaker for PechaKucha Night Baton Rouge Vol. XV, a Japanese-influenced storytelling event; and celebrated sisterly empowerment at the inaugural Women of Worth Soiree.

Awards were bestowed upon Chenese in 2021 as she was recognized for her work as a philanthropist and podcaster. Friends of the Capitol Park Museum honored her as the inaugural recipient of the prestigious 2021 President’s Award for Board Member Excellence. Chenese raised $16,000 for the Smithsonian Institution Traveling Exhibition Service’s (SITES) exhibition “The Negro Motorist Green Book” to be on display at the Capitol Park Museum in Baton Rouge. In addition, she was awarded 2021 Outstanding Podcast for The Chenese Lewis Show by The Full Figured Industry Awards for her exceptional content and unique ability to engage audiences.

The Chenese Lewis Show remained the most influential podcast for the plus size industry. Several national brands and retailers appeared on the show. A few of the notable guests included Grisel Paula, Founder and CEO of Rebdolls; Nick Kaplan, President and Co-Founder of Fashion to Figure; Heather McGarry, AVP of Public Relations and Social Media for Lane Bryant, and Hayley Hasselhoff, who made history as the first curve model to appear on the cover of Playboy German!

Chenese graced the covers of two magazines, the January issue of Daily Venus Diva Magazine and the March/April issue of True Self Magazine; in addition to being interviewed by several media outlets including inRegister Magazine, Latin Connection Magazine, Voyage LA Magazine, The Curvy Fashionista, and Blavity. She made appearances on multiple podcasts including The Stiletto Talks, Raising A Powerful Girl, Power Conversations Podcast, Mrs. Globe IGTV, Tasha Haskins Show, Tea Time with Monica, and Out To Lunch which airs on WRKF-FM 89.3 in Baton Rouge. Showcasing her writing skills, she penned an article in the Fall issue of Hope Magazine entitled “5 Things In My Life That I Make No Apology For”, encouraging women to live unapologetically!

Chenese already has exciting things scheduled for 2022, make sure you follow her on all social media platforms and visit www.CheneseLewis.com often and to stay up to date!