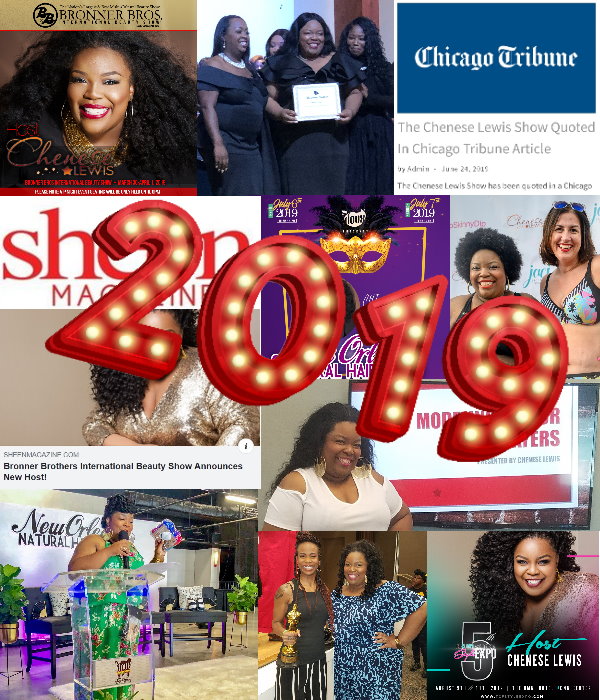 2019 was a successful year filled with new opportunities and growth. Chenese hosted the Bronner Brothers International Mid-Winter Beauty Show at the New Orleans Ernest M. Morial Convention Center, which is the largest multicultural beauty show in America with over 35,000 attendees. During the event, Chenese had the opportunity to interview special guests including actor and rapper, Shad “Bow Wow” Moss. Returning for the sixth consecutive year, she hosted the New Orleans Natural Hair Expo during the Essence Music Festival weekend in which she moderated a panel discussion with some of the industry’s top natural hair influencers and conducted a live one-on-one interview with Maya Smith, CEO of The Doux. In Atlanta she hosted the TCFStyle Expo for the fifth consecutive year, sharing the spotlight with Atlanta radio personality, Big Ray. TCFStyle Expo sponsor Anthropologie dressed Chenese for the main stage.

Continuing to expand her brand in diverse markets, she presented a workshop entitled “Modeling 101 for Cosplay” at the second annual Mid City Micro-Con, hosted by the East Baton Rouge Parish Library System. Chenese was also a panelist at the inaugural BlerdFest convention on the “We In There! Black Representation In Nerd Culture” panel discussion. The event included a conversation with Hannah Beachler, the first black woman to be nominated and to win an Oscar for Best Production Design on the film Black Panther.

A former Fashion Icon Award recipient, Chenese returned to Baton Rouge Fashion Week as a judge for the sixth annual model search and she was also a special guest for Jaci Blue Boutique’s second annual Not So Skinny Dip: Plus Size Pool Party. In addition, Chenese shared her industry expertise through a Q&A session for the SITI GIRLS Masterclass Challenge, which helps women elevate their brands and businesses through group challenges and accountability.

The Chenese Lewis Show served as media sponsor for some of the most prestigious events in the plus size industry including the inaugural Full Figured Industry Awards in New York. The show was also featured in the Podcast Business Journal as a successful podcast in a niche market and Chenese’s interview with plus model Jessica Milagros of Big Brother Season 21 was quoted in the Chicago Tribune.

Dia&Co recognized Chenese for Black History Month as a trailblazer in the plus-size fashion industry in their series entitled Because Of Her: An Homage To The Women Of Color Who Shaped The Industry spotlighting her accomplishment as an early content creator by starting the very first podcast geared towards the plus size industry.

Numerous media outlets interviewed Chenese in 2019 including Sheen Magazine, NOLA.com, Voyage Dallas Magazine, The Drum Newspaper, Unrivaled Magazine, #CurvyGirlsSlay Magazine and The Dean of Fashion & Beauty. She appeared as a guest on radio shows and podcasts including WBOX Talk Radio, The School Of HardKnots, Diva’s Diamonds, Brunch and Slay Podcast, and Her Business Her Voice Her Conversation. As a speaker, she was included in event coverage by WAFB.com, Gambit, and The Advocate. Chenese was also mentioned in an article on TheRoot.com as a pioneer in the plus size industry.

Chenese believes wholeheartedly in giving back to her community. This year she was inducted as a member of the National Coalition of 100 Black Women, Inc. Metropolitan Baton Rouge Chapter, as well as appointed to the Board of Directors, as Vice President of Programming for CreActiv, LLC.

In 2020, Chenese will celebrate 20 years in the plus size fashion and body positivity industry. Exciting things are already scheduled, so make sure you visit www.CheneseLewis.com to stay up to date!