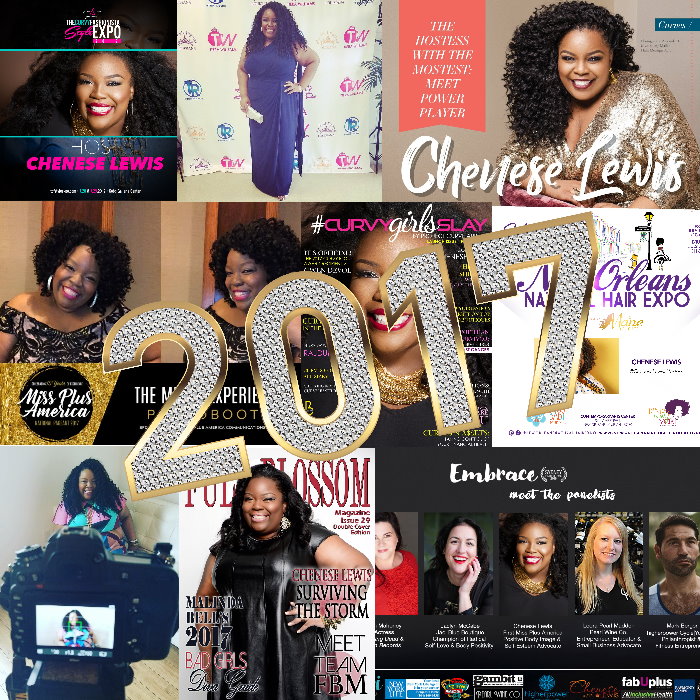 This year was all about rebuilding, restoring, and recovering after the devastation of 2016, in which Chenese and her family lost everything in the record-breaking flooding that submerged the city of Baton Rouge and surrounding areas. Although Chenese spent the year displaced with a lack of material things, she still thrived in 2017 amongst tragedy.

Chenese returned as host of the New Orleans Natural Hair Expo during the Essence Music Festival weekend for the fourth consecutive year and served as the moderator for a panel discussion with some of the industry’s most influential natural hair vloggers and CEOs of national haircare brands.  She also returned to host the TCFStyle Expo in Atlanta for the third consecutive year, this year sharing the spotlight with Atlanta radio personality, V103’s Big Ray. TCFStyle Expo presenting sponsor Ashley Stewart dressed Chenese for the entire weekend of festivities. Both expos, highly successful, continues to grow Chenese’s brand in diverse markets and regions.

Being an expert in the plus size industry with years of experience made Chenese more than qualified to judge various competitions this year. Chenese served as a judge at the inaugural Ms. Full-Figured Louisiana Pageant, she returned as a former titleholder to judge the 15th anniversary of the Miss Plus America Pageant in Dallas and was also announced as a judge for the Revenge by Curvy Boutique model search in Baton Rouge.

Chenese served as a panelist for a special screening of the body-positive documentary film “Embrace”, which raised money for Girls on the Run New Orleans. She also was filmed for The American Woman Project, a national multimedia portrait and documentary series that aims to reframe what we think of when we hear the descriptor “American woman” to include Black American women.

The Chenese Lewis Show was an official media partner of the 2017 I Got Curve Appeal Convention. Chenese brought the podcast out of hiatus to interview the convention’s honoree Gwen Devoe, creator of Full Figured Fashion Week. She also interviewed Liris Crosse, who is one of the first plus-size models to appear on Project Runway and win the modeling competition.

In 2017 Chenese continued to gain praise from various publications. Chenese appeared on the January cover of Full Blossom Magazine, shot in New York City, with an exclusive interview entitled “Surviving The Storm”. The proceeds from the issue were to be donated to Chenese for flood relief and recovery. She graced one of the triple covers for the premier issue of #CurvyGirlsSlay Magazine with a featured interview entitled “Checking In With Our 2011 Curvy Icon” spotlighting Chenese as the first recipient of Project Curve Appeal’s Curvy Icon Award. Chenese was also featured in the Fall issue of FabUplus Magazine, available on newsstands nationwide across the United States and Canada.

Exciting things are already scheduled for 2018, make sure you visit www.CheneseLewis.com often to stay up to date!