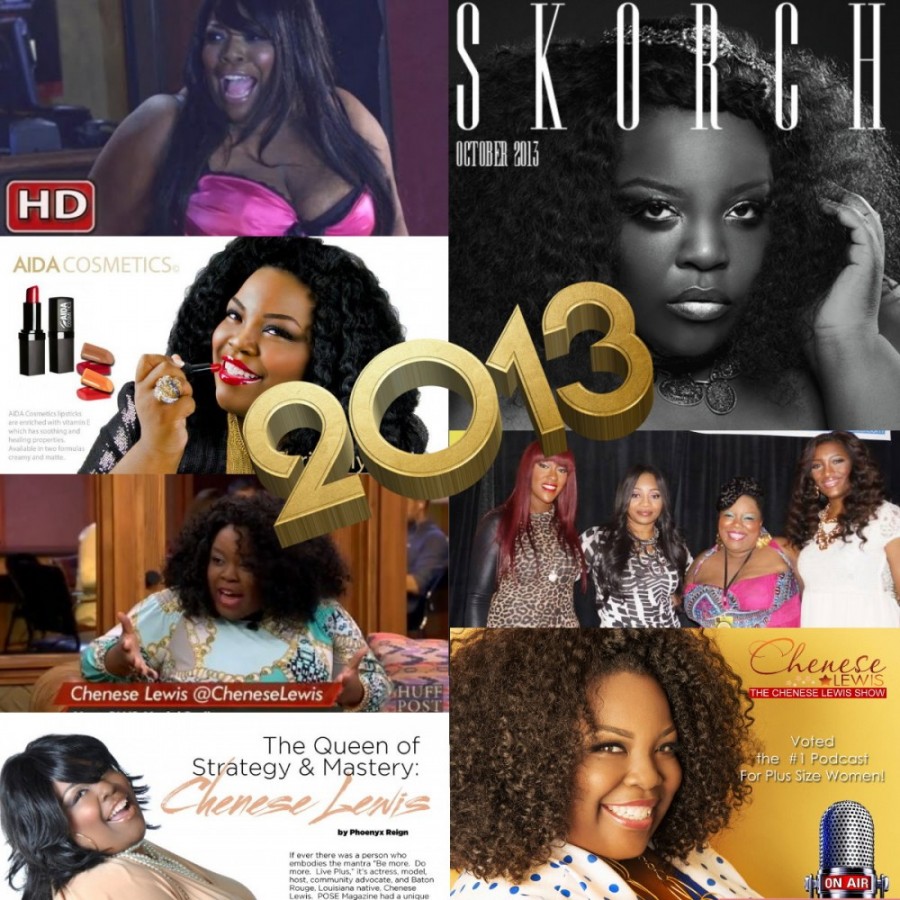 2013 started out with a nationwide release of Noobz on DVD and On-Demand (on TV). Chenese appeared in the Wunderkind Pictures feature, Noobz, an indie “gamers” film about four friends and Gears of Wars players who embark on a quest to survive a road trip and win a Gamecon Championship. Chenese appears alongside Casper Van Dien (Starship Troppers), Jason Mews (Jay and Silent Bob), Moises Arias (Hannah Montana), Mindy Sterling (Austin Powers), and Jon Gries (Napoleon Dynamite) in the hilarious comedy.

With a broad and diverse audience Chenese hosted events for plus sizes, natural hair, and various charity organizations in 2013. She hosted the 9th Annual Miss Plus Top Model Awards, Curves and Swerves Fashion Show, and a International Natural Hair Meet Up Day event Your Style Your Natural in Baton Rouge. She also hosted many philanthropic projects such as Project Promise prom dress drive for disadvantaged teens in Chicago, NEDA Awareness Week Tweet Chat to raise awareness about Eating Disorders for African American women, and LifeDriven Foundation Charity Fashion Show benefiting kids with cancer.

As an expert panel moderator Ms. Lewis was invited to facilitate discussions on a wide variety of topics such as natural hair and beauty standards within our society at the Afrolicious Hair Affair, breaking through and working in the beauty industry at the Makeup Beauty Guru Mixer, and the women’s liberation movement at the film screening of Feminist: Stories from Women’s Liberation where she also lead a Q&A with the film’s director in Beverly Hills.

Chenese returned to the Essence Music Festival in New Orleans for the fourth year and interviewed celebrities such as Michelle Williams from Destiny’s Child, SWV, The Braxtons , Avant,  PJ Morton from Maroon 5, and many more. While at the Essence Music Festival Chenese re-partnered with Simply Fashion, who not only dressed her for the entire weekend, but gave away shopping sprees to many of Chenese’s lucky fans though a daily Instagram giveaway! Chenese was also a special guest at Dr. Miracle’s, a leading ethnic hair care line, signature consumer event The Doctor’s Prescription Lounge (#RXForStyle) during the Essence Festival Weekend.

The full figured fabulousness continued to shine in 2013 as Chenese appeared on the Huffington Post Live for a positive segment to discuss the plus size bikini phenomenon, better known as the “fatkini”. She also created a Meetup Group for the Los Angeles Plus Community and hosted four Meetups throughout Los Angeles and Orange County and helped to create a stronger network for the plus industry in Los Angeles. Chenese also appeared as a co-host on the newly launched web series Go Curvy.

After celebrating the 5th Year Anniversary of PLUS Model Radio Chenese rebranded the podcast to The Chenese Lewis Show and closed the year with a nomination for the prestigious Podcast Awards during the New Media Expo in Las Vegas!

Exciting things are already scheduled for 2014, make sure you visit www.cheneselewis.com to stay up to date!