Chenese To Be Featured Guest On Ahead Of The Curve: Black And POC Leadership In Plus Fashion 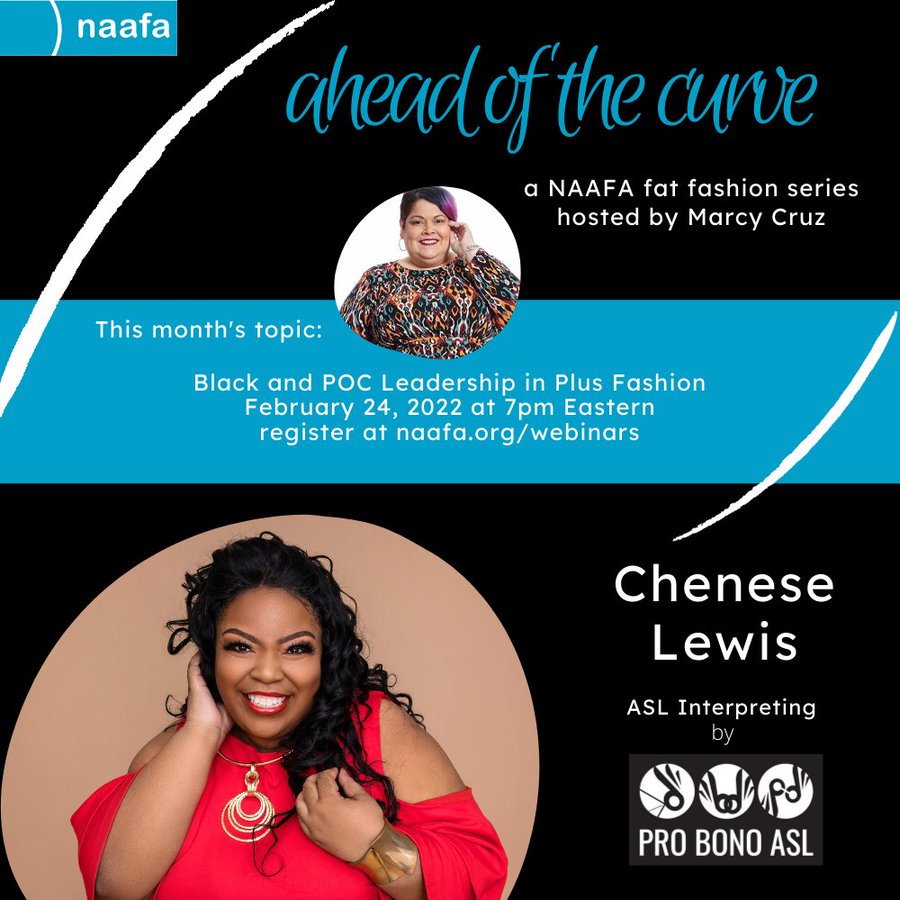 FEBRUARY 24, 2022 AHEAD OF THE CURVE: BLACK AND POC LEADERSHIP IN PLUS FASHION

In this edition of Ahead of the Curve, Chenese and Marcy will discuss how Black Women/Women of Color paved the way in the fashion industry for plus size bodies to be in the forefront and continue to push for size inclusivity.

Accessibility notes: This webinar is presented in English with closed captioning by Otter.ai and ASL translation is provided by Pro Bono ASL.

Chenese Lewis is a Louisiana-based media correspondent, speaker, model and the voice behind the successful podcast The Chenese Lewis show, the first podcast for the plus-size community that launched in 2008.

Considered an icon and trailblazer within the plus size industry, Chenese has over 20 years of experience, which began with her being crowned the first Miss Plus America in 2003. This led her to work with different plus-size brands such as Torrid and Ashley Stewart as a model and spokesperson at a size 22, during a time when the standard plus-size model was between a size 8 and 14.

Chenese used her platform to push for body positivity and more diversity in fashion. She served as President of the National Organization for Women Hollywood Chapter (Hollywood NOW) for two years and produced Hollywood NOW’s “Love Your Body Day” event from 2006 – 2011, an annual event to promote positive body image which was sponsored by the City of West Hollywood. In these events, she pushed to cast a wide range of models, including models over a size 22.

In 2010, Chenese posed nude with America’s Next Top Model cycle 10 winner Whitney Thompson in the promotional campaign for the event, which went viral and magnified Chenese’s role as a leading positive body image advocate.

Since then, she has hosted large-scale fashion events during New York Fashion Week, Los Angeles Fashion Week, and abroad in the U.S. Virgin Islands. She also graced the cover of VICE Magazine UK’s 10th anniversary issue and posed for the popular celebrity-driven NOH8 Campaign.

In 2020, Forbes Magazine called Chenese “one of the original plus-size influencers”. She continues to be a sought-after speaker and expert on topics focused on positive body image and her message has not waivered. She believes that you can be beautiful and confident regardless of your size. Considered a pioneer within the plus size industry who paved the way for those who came on the scene after her, she continues to push for inclusivity, acceptance and equality for all.